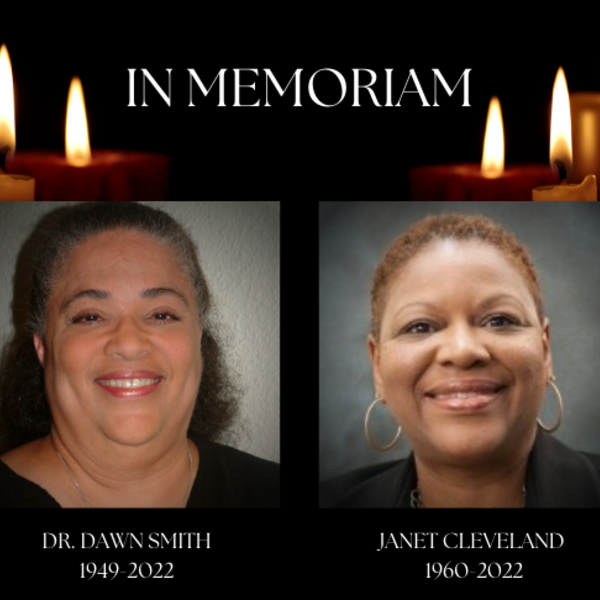 NASTAD wishes to remember and honor two HIV prevention champions at the Division of HIV Prevention (DHP) who passed away in the past two weeks – Ms. Janet Cleveland and Dr. Dawn Smith.

Janet Cleveland worked at the CDC for more than 30 years and was known for leading with kindness, a listening ear, and a touch of humor. She was a mentor to HIV prevention staff and a champion at DHP for health department and community concerns. Janet was involved with NASTAD since the organization’s early days and was a long-standing participant in our meetings where she would moderate sessions so NASTAD members could give and receive feedback from her directly. These sessions would serve as a sounding board for health department concerns around the development of NOFOs, and Janet was always open to listening and thinking about how DHP could reduce reporting burden, break down silos, and work with health departments in a more intersectional way.

Janet was one of the federal partners who really took note of the “Federal Reporting Requirements Matrix” that NASTAD developed to illustrate the numerous and often competing requirements that health department infectious disease programs face and took concrete steps to streamline and reduce them. At the end of the day, we could always trust that Janet was on our side.

Janet’s family is requesting that donations be made to My Brother’s Keeper (Jackson, MS) and Us Helping Us, Inc. (Washington, DC) in Janet’s name, in lieu of flowers.

Dawn Smith was a longtime friend of NASTAD and was a trusted colleague and mentor to many of the organization’s staff. She will be remembered for her brilliance, integrity, collaborative spirit, and for ensuring the people living with and vulnerable to HIV are centered in both the scientific and federal response to the HIV epidemic.

Since 2010, Dawn was at the forefront of the CDC’s HIV pre-exposure prophylaxis (PrEP) implementation efforts as the DHP’s Biomedical Interventions Officer. She was also the lead of the CDC’s Prevent Pillar Workgroup, addressing one of the four pillars in the Ending the HIV Epidemic in the U.S. initiative. Dawn was a champion and lead of the U.S. Public Health Service Pre-Exposure Prophylaxis for the Prevention of HIV Infection in the United States clinical practice guidelines, which have proved essential to the clinical decision making and the implementation of best biomedical prevention practices for people vulnerable to HIV infection nationwide.

Dawn was fiercely committed to meeting the prevention needs of women and girls vulnerable to HIV, including pioneering research work that spanned decades. In the 1990s, she was a lead of the HIV Epidemiology Research Study (HERS), a vitally important cohort study of women living with and vulnerable to HIV. And prior to her focus on PrEP scale-up and implementation work, she was the associate director for HIV research at the CDC field station in Botswana and contributed to some of the earliest clinical research supporting the use of PrEP to prevent HIV transmission.

Dawn either led or contributed to more than 100 scientific papers that called important attention to significant disparities among communities of people living with and vulnerable to HIV, including women of color, people who use drugs, African Americans, Latinx individuals, Native Americans, immigrants, and incarcerated individuals. Dawn’s significant scientific and programmatic contributions over her 30+ year career with the CDC – including her work on the response to the monkeypox virus (MPV) epidemic at the time of her death – are a testament to her steadfast commitment to health equity.

Janet and Dawn will be sorely missed, but their legacies of strong governmental public health and community partnerships will stay with us.

A monthly dose of news delivered straight to your inbox.
END_OF_DOCUMENT_TOKEN_TO_BE_REPLACED