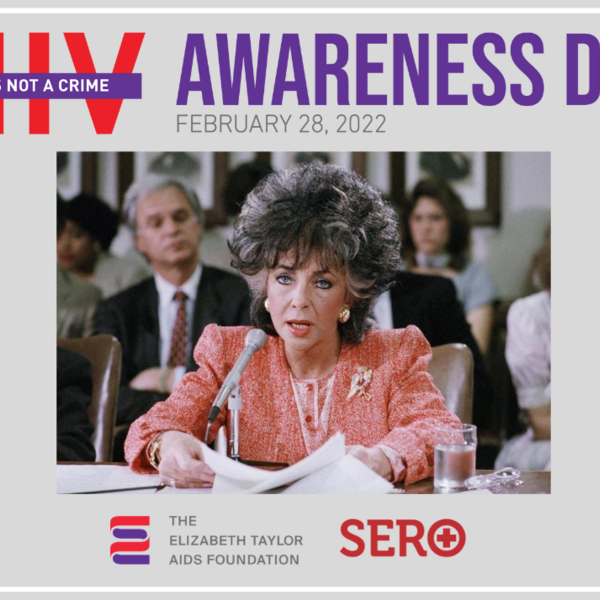 Inaugural HIV is Not a Crime Awareness Day

February 28, 2022 marks the first annual HIV is not a Crime Awareness Day (HINACD) / HIV Criminalization Awareness Day (HCAD). This national observance was launched by the Sero Project in collaboration with the Elizabeth Taylor AIDS Foundation. The awareness day also honors HIV/AIDS activist Elizabeth Taylor, whose birthday is February 27. HINACD is intended to raise awareness around unjust laws that criminalize people living with HIV (PLWH). The day is dedicated to advocating for HIV criminal law reform and eradicating policies and legislation that discriminate or stigmatize individuals due to their health status.

According to the Sero Project, HIV criminalization laws consist of wrongfully using a person’s positive HIV status in a criminal prosecution and heightening charges or punishments simply because the person charged is living with HIV. Additionally, an HIV-specific law specifically aims to target PLWH for engaging in conduct that is only deemed illegal because of their HIV status. Many of these laws can lead to PLWH being sentenced because they did not disclose their status, even if HIV is not transmitted. HIV criminalization laws are present in almost 30 states and disproportionately impacts Black and Latine communities; sex workers; and LGBT+ individuals.

Not only are these laws unjust, but they also are not deemed effective in mitigating HIV transmission. There is no research to support that HIV criminalization laws successfully reduce HIV transmission. Studies show that these laws actually dissuade individuals from getting tested; seeking treatment; and disclosing their status due to fear of prosecution. HIV criminalization laws are outdated and do not reflect the times that we are in. Recent medical and scientific advancements in HIV research support that PLWH who regularly adhere to antiretroviral therapy (ART) can maintain an undetectable viral load and not transmit HIV through sex. In this case, undetectable equals untransmittable, or U=U. Also, pre-exposure prophylaxis (PrEP), when taken as prescribed, is highly effective in preventing HIV transmission.

NASTAD prioritizes social justice and dismantling discrimination and stigma at all levels. The Talking Points Stigma Toolkit is a NASTAD resource that recognizes the need for repeal and reform of HIV criminalization laws. It focuses on the importance of modernizing these laws and provides an example of how North Carolina’s HIV Control Measures were amended.

HINACD is an opportunity for health departments, community members, activists, policymakers, and more to emphasize the message that HIV is not a crime and laws that perpetuate this should be repealed. For more information about HINACD or how to get involved, visit the following sites:

A monthly dose of news delivered straight to your inbox.
END_OF_DOCUMENT_TOKEN_TO_BE_REPLACED