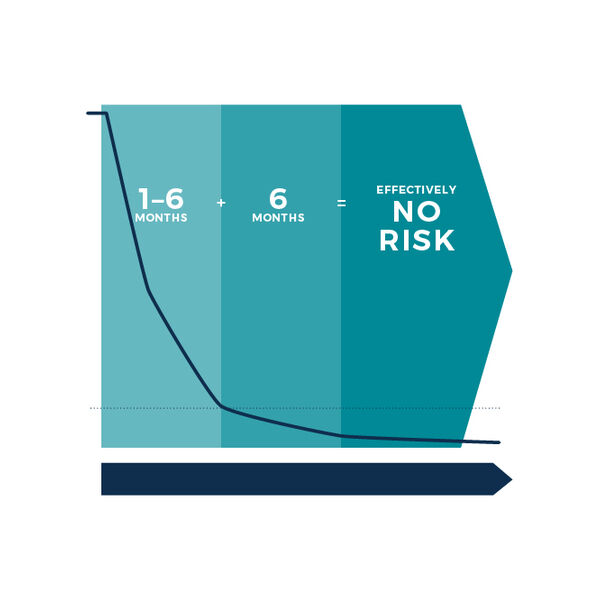 The goal of HIV treatment is viral suppression. HIV treatment, called anti-retroviral therapy (ART), works to prevent HIV from replicating in the body. When a person’s viral load is less than 200 copies per milliliter of blood, they are considered virally suppressed. Additionally, when the viral load is so low that blood tests cannot detect the virus (usually having less than 50 copies of HIV per milliliter of blood), they are considered undetectable. Being “undetectable” does not mean that a person no longer has HIV; instead, it means that they cannot transmit HIV sexually to another partner. It is important to remember that once a person reaches the state of being undetectable, they must continue to remain adherent to their medication to remain undetectable. For most people living with HIV who are adherent to their ART and do not face additional complications, they will reach viral suppression within about six months. To be considered “durably suppressed,” they must maintain this undetectable status for an additional six months.

What is Viral Suppression? | NIH

An explanation of viral suppression, and what it takes to achieve and maintain it. 30 sec

Take every pill every day | NIH

Remaining virally suppressed take a commitment to adhere to your medication, correctly, every day. 30 sec

Viral suppression, particularly to the point of becoming undetectable, is paramount in efforts to destigmatize PLWH. Dr. Carl Dieffenbach explains why. 5 min, 31 sec

In Arizona, a collaborative effort is underway to enroll Latinx and Ryan White HIV/AIDS Program (RWHAP) clients into health insurance. Agencies are undergoing activities such as identifying clients’ preferred language in RWHAP applications, hiring bilingual staff, and producing materials for clients in English and Spanish. These interagency coordination efforts help to build trust with Latinx clients, while insurance access allows Latinx clients to have more comprehensive care than the RWHAP programs alone can provide.

The Critical Events System in Colorado provides intensive case management and planning to clients newly diagnosed, lapsed in care, or medically vulnerable, who are also experiencing periods of instability (e.g., homelessness, unemployment, substance use, mental health concerns).  Through support and assistance in accessing care and re-engaging in treatment, along with help in stabilizing their personal lives, the program attempts to aid clients in reaching viral suppression, and thus becoming less likely to transmit HIV.

The District of Columbia Department of Health AIDS Drug Assistance Program (DC ADAP) recognized that ensuring gender identity support for transgender persons living with HIV was a vital approach to promoting and achieving HIV treatment adherence, viral suppression, and healthy outcomes. The DC HIV/AIDS Drug Advisory Committee (HADAC) reviewed recommendations from the Subcommittee of the HIV AIDS Drug Advisory Committee (DC subHADAC) and approved addition of various medications for transgender hormone therapy to the formulary. The initial funding will be appropriated from the DC Ryan White Part B ADAP grant award, and any other cost for pharmacy provider education will be supplemented by DC ADAP rebates. This allows ADAP clients to receive hormone therapy in cases where other payers are unavailable or cannot provide sufficient coverage, and educates pharmacy providers about how to provide appropriate medication consultation and drug utilization reviews for potential drug interactions. To date, DC ADAP has 11 clients utilizing hormone therapy.

In Louisiana, data linkages with HIV surveillance and the use of viral load suppression incentives enables Medicaid managed care organizations to better monitor HIV-related outcomes among their enrollees. HIV viral suppression data can be used by MCOs to improve their outreach and services for persons living with HIV who are not virally suppressed or not in HIV-related medical care.

The Comprehensive HIV/AIDS Resources and Linkages for Inmates (CHARLI) Program provides linkage to medical providers, medication access, transportation assistance, and assistance in applications for social services for PLWH who are transitioning out of correctional settings and back into community in Virginia. In addition to lower rates of recidivism among participants, retention in care and viral suppression rates at follow up for CHARLI clients were 97% and 75%, respectively.

What does it mean to have an undetectable HIV viral load?

A person living with HIV is considered “undetectable” when their viral load is so low that copies of HIV cannot be detected in a standard blood viral load test.

How does U=U messaging challenge stigma?

How might people who cannot achieve an undetectable threshold face stigma?

Not everyone who is virally suppressed will reach an undetectable level. Regardless of intention and adherence, the virus and one’s general health varies person-to-person. It is important to note that a person who is virally suppressed, but has not yet achieved an undetectable threshold, is still significantly less likely to transmit the virus than if they were not on an ART regimen. They can still live a healthy and sexual life with medication adherence and condoms.

A monthly dose of news delivered straight to your inbox.
END_OF_DOCUMENT_TOKEN_TO_BE_REPLACED